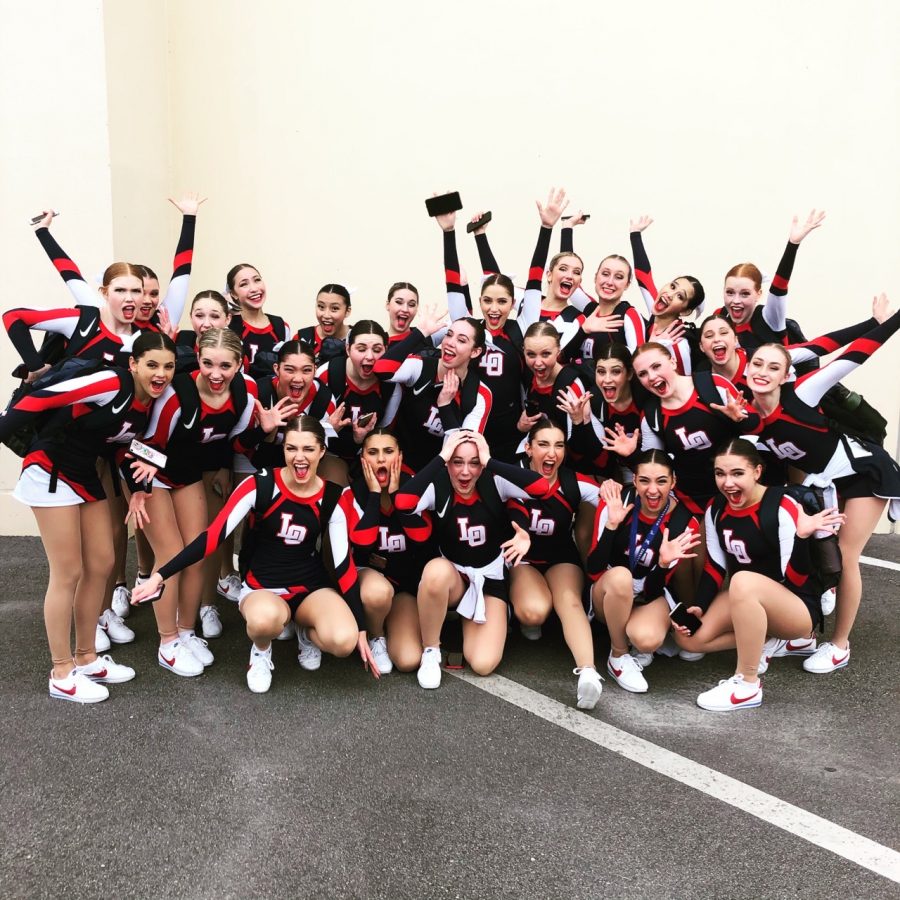 The Lake Oswego High School dance team poses with their trophy after winning tenth place in the Gameday event of the Universal Dance Assocation national competition in Orlando, Florida.

For the first time in 10 years, Laker Dance placed in the top 10 at the Universal Dance Association (UDA) Nationals in Florida. Competing in the Game Day category, they are the first Oregon team to represent this category.

Starting in June of 2019, the dance team began to choreograph, learn and perfect their nationals routine. But to even qualify, teams must get a bid to go and meet specific standards to be eligible to compete.

The first step was attending UDA Camp at the University of Puget Sound. All teams were required to bring a routine to compete against other teams with the winning team getting a bid to go to Nationals. Laker Dance easily accomplished this, winning with a perfect score. “After that camp, we began putting our routines together. All of that work is in addition to building our strength and technique, performing at football games, Oregon Competitions, doing community service, and of course, LOTS of fundraising. It’s very expensive to attend Nationals,” head coach Hayley Dulong said.

After winning at the camp, the team then went on to Orlando for the next part of the competition. Breezing through the preliminaries, the team later moved on to the semi-finals. “In semi-finals, the judges only take the top 50 percent of the teams competing,” DuLong said. “LOTS of teams don’t make finals, and remember, these are teams who had to win the camp competition to come. So, we are competing against the best of the best.”

On the final day, only half of those who  competed in semi-finals remain in the competition. Senior Sabrina Safari explained how, “In the final round, everyone gets a trophy and places are awarded from 20th to first place in the nation.”

For the dancers, the nationals experience is a very mentally and physically tough feat. “We have high expectations for ourselves and competing at a national level with hundreds of the best high school teams in the U.S. is extremely challenging,” Safari said. “It is not only hard to prepare for, but difficult in terms of being able to compete with all the different amounts of talents and high level of other teams.”

But Laker Dance was able to push through the challenges they faced and come out in the 10th spot in the nation! “We were absolutely ecstatic!” said Dulong.

Safari described her reaction as “shock and happiness all at once. It was amazing especially because we are the only team in Oregon able to make it to finals, which is not a small feat.” Safari’s teammate, sophomore Jovie Chen commented how it was an amazing feeling. “I’d never been more excited before and our whole team was screaming and crying,” she said.

After this incredible win, the dance team will continue on with their season, taking a different routine to state. The school is extremely proud of them and wishes them the best of luck!