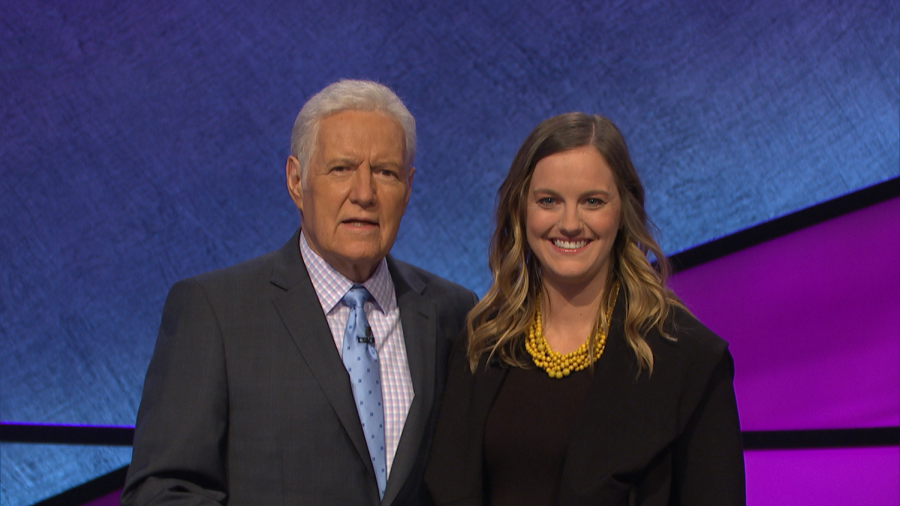 This LOJHS math teacher won a game of Jeopardy.

Who is Heather Nelson?

The nation was watching as Nelson won a thrilling round of Jeopardy that aired in late January, winning an impressive combined total of $9,799 over her two games.

Competing on Jeopardy had been a long-time dream of Nelson’s, who first applied during college. “I went to Linfield, so it’s a super small school… I had always watched the college tournaments, and everyone’s always from Harvard and Stanford and all these big schools everyone’s heard of. So I thought, ‘How cool would it be to represent Linfield, to go on there and be from a school that nobody’s ever heard of?’…Obviously, it didn’t happen, but I started taking the [entrance] test at that point, and kept taking it for 12 years until it finally happened… My family always watched it growing up, so Jeopardy has been a part of my life [for a long time.]

She recalls being on the show as “overwhelming and crazy and fun… simultaneously a whirlwind and, at least for me because I was the last show [taped] of the day, feels like it’s taking forever.” After the contestants fly themselves down to Los Angeles, a shuttle picks them up from their hotel and takes them to the Sony filming lot by 7:30 a.m., where they spend the day. After Nelson got to play a few practice rounds with the Clue Crew, she watched episode tapings from the audience, as her show was the last taped for the day. Five shows are taped in a day, so as Nelson recalls, “when Alex makes some comment about yesterday it was literally 30 minutes ago.”

“The commercial breaks are nearly as long as they are on TV… and so during the breaks Alex comes out and… takes questions from the audience.” Nelson learned, among other things, that Alex Trebek is a home improvement buff. “He loves to do home improvement projects. He remodeled his master bathroom for his wife and stuff like that… if you follow the Jeopardy instagram account, they’ll sometimes post pictures of him having done projects… He’s a home improvement project kind of guy.”

Luckily for Nelson and her students, there was one math question. “The category was 12 letter words, so in the offset it didn’t seem like it would be a math question… it was like ‘This thing is two times the radius times pi of a circle’ and so it’s circumference… and the thing that was great because I did show my episodes to my students, my 6th graders had just learned about circumference for the very first time… For a couple classes I paused it [before the answer and asked] ‘What is it?’”

Nelson didn’t have much time to prep for the show, being a full-time teacher and receiving the call closer to the taping than most other contestants. “From the moment I got the call, every single night when we would watch Jeopardy, [my husband] would pause before Final Jeopardy and make me analyze betting strategies. He would say, ‘Ok, you’re in second position here, this is the category, what are you going to do?’ And so for a month I was doing all of this analysis every night… to try and figure out what the best position [would be]… [During the taping] I was also looking at him in the audience going, ‘Can you please, like, telepathically, tell me this number? Please? Because I know we’ve talked about it, but now all the pressure’s on, and please tell me what I should do!’” When discussing afterwards, Nelson discovered her husband actually would have bet more money than she did. But the way things turned out, she would have taken home $1,400 less had she bet her husband’s amount.

Nelson implores the student body to keep an eye out for the application test for the Jeopardy Teen Tournament. “I don’t know when they’re gonna do it again… but… people need to give it a try. You can’t do it if you don’t take the test, and it’s a really, really cool experience.”