All LOHS competitors rank as finalists in at least one event 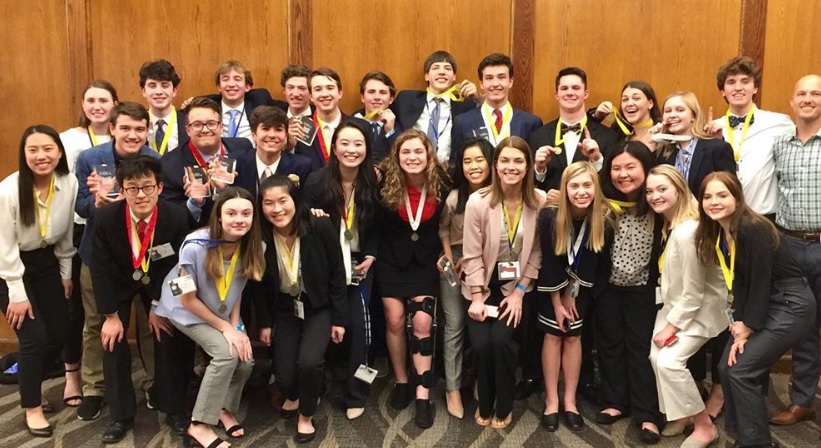 Lake Oswego DECA students pose with their awards after a successful tournament.

From Feb. 23 to Feb. 25, the LOHS International Marketing class competed at the State Career Development Conference (SCDC) against more than a thousand other Oregon students and, for the first time ever, every single LOHS competitor finalled in at least one event. The event was sponsored by Distributive Education Clubs of America (DECA) and was held at the Red Lion Hotel on the River Jantzen Beach in Portland.

Students who are in the top three for roleplays and the top two for written events will be given the option to compete in an event at the International Career Development Conference (ICDC) in Nashville, Tennessee from from April 29 to May 2.

“I mainly got involved with DECA because business economics is the major I want to pursue in college, so this was an experience that really did solidify my interest in my future profession,” Wang recalled.

“It was really fun because I met a lot of new, highly intelligent people who have the same interests in business/career development as me,” Wang continued. “I recommend that people do it because it is a competition that helps you learn to reason effectively and find solutions.”

“My partner Gabe Levy [who was also elected as a DECA State Officer] and I will be going to ICDC in Business Law and Ethics, which is an impromptu duo event,” Jones said. “We didn’t know what to do, and we were really thrown in there, but we were able to adapt to the situation and we came up with a pretty cool presentation.”

“I loved it!” Dougherty said of the state competition. “I didn’t know how well I was going to do as I had just had oral surgery and was pretty sick, but I ended up placing in three events.”

When not in competition, Doughtery said, students spent time “bowling, preparing for other events and laser tagging.”