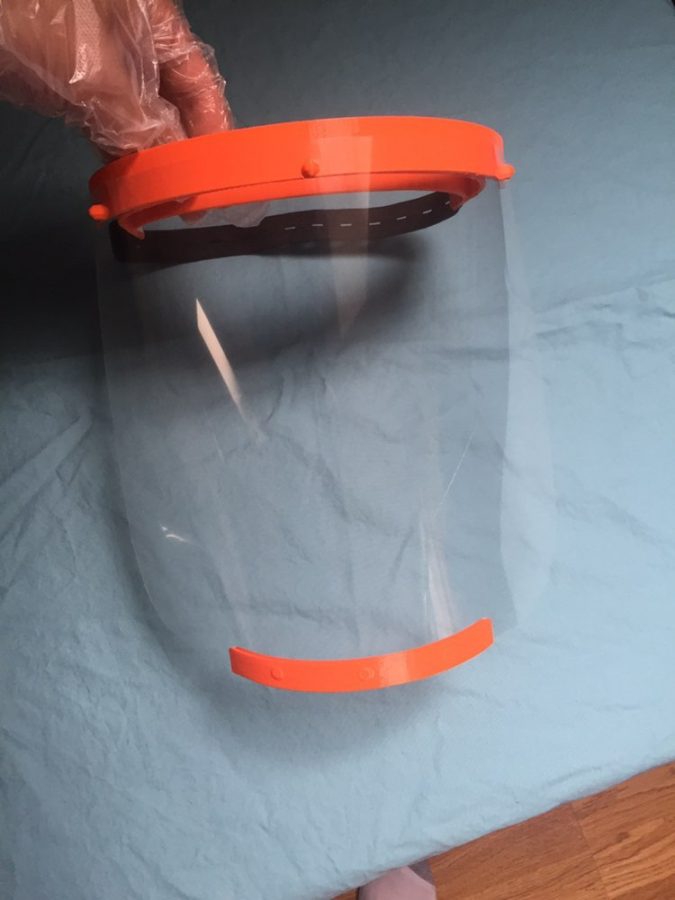 Lake Oswego’s very own robotics team Tobortech FTC has stepped in to help out their community members in keeping COVID-19 from spreading. Normally, this team of 15 LOJ and LOHS students would be getting ready to compete in the World Championships, but with COVID-19 keeping everyone apart, their competition was cancelled. Instead of doing nothing, they decided to help fight the virus . Working with the Create4pdx campaign, they have been 3D-printing Prusa RC3 face shields with the mission to help frontline healthcare professionals in the fight against the Coronavirus.

Create4pdx was first inspired by eighth grader Mark Williams when he, like many others, was feeling like there was not much to do. “I had the idea one night after I had pretty much just started making these shields,” Williams said.

Initially, he began experimenting with the printer himself. “I got the printer and that came as somewhat of a surprise. I was pretty excited, honestly, to do something,” said Williams. After some time learning about the printer and going through tutorials it was ready to be set up. “It was surprisingly simple,” Williams continued. “Twenty hours later I had the two components needed for a prototype and used in-house materials to get the rest of the parts [to finish it].” It was then, after having this success, that he truly believed the idea could work.

Simply making them himself was not enough once he realized there was more he could do. “I read the news daily, and it was at this time I started to see New York City get out of hand. I started thinking about where I could get more. I figured that there were many printers sitting dormant in the [Lake Oswego] area, as rare as they are. I thought it had potential [and] texted two friends that night,” Williams said.

As his plan progressed, Williams involved more members of Tobortech, and since doing so there has been significant progress in their work. With 15 masks donated to Salem Hospital in the beginning, after only a few weeks (or however long it’s been), they have now delivered over 100.

To make the masks, there are two parts that need to be 3D-printed. To do this they “use an open source design from Prusa in active-use around the world. This will take around 2-3 hours.” After the parts have been printed, they go to Williams to be assembled. Williams then continued to explain that from there they “add elastic and attach the plastic shield, which is a simple transparent piece of elastic.” Lastly they are glued together to ensure they remain steady and intact, and “from there they are labeled and bagged for shipment.”

A large part of  Create4pdx is their realization of the lack of personal protection equipment (PPE) there is. Not only do hospitals need PPE, but many other departments need them as well and Create4pdx intends to provide them. “We believe it is our mission to provide PPE where it is not available currently and serve the community,” Williams said. “We have delivered to hospitals, retirement homes, clinics, seniors, and are looking at small businesses.”

These masks are made by individual request, but are all donations. For anyone who requests a mask they can contact Create4pdx through Instagram, Facebook, Twitter or email, all at create4pdx. To learn more about their campaign and/or how you can help, you can visit their website for more information: https://www.sites.google.com/view/create4pdx.