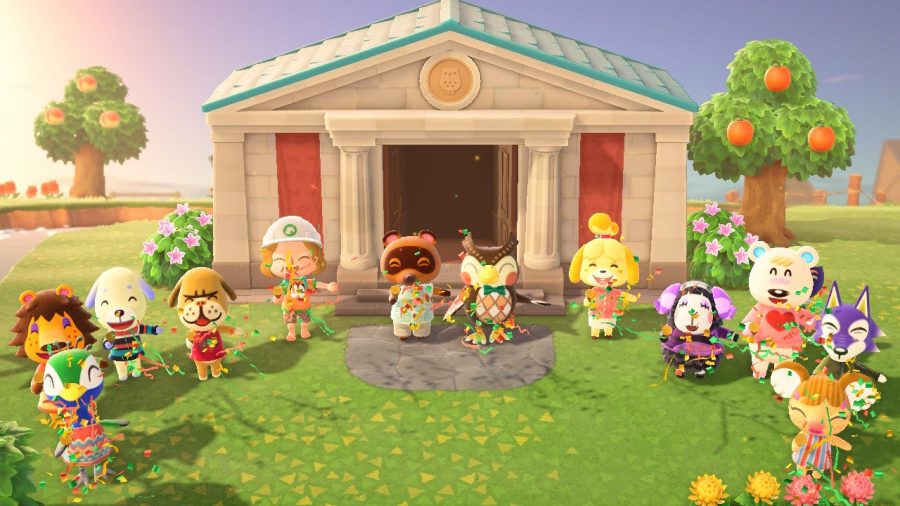 “Animal Crossing: New Horizons,” is the perfect addition to it’s franchise.
AC is a Nintendo series that began in 2001 with its titular game- “Animal Crossing.” Since then, it has had eight releases, with the most recent being “Animal Crossing: New Horizons,” for the Nintendo Switch. In the game, the player moves into a village along with a group of anthropomorphic animals. There are no set objectives, no enemies and no battles. It is peaceful, with the only real goals being to pay off your home loans, discover creatures, fossils and art to fill up a museum and to relax.
The newest addition couldn’t have come at a more convenient time. Can you think of a better way to spend your days quarantined at home than talking with animals and growing virtual flowers? (Spoiler alert- you don’t have to social distance in “Animal Crossing.”)

I believe that the reason this franchise is so timeless is because it caters to everyone. New to video games? AC is relaxed and can move at whatever pace you want. “Animal Crossing” veteran? Old features and characters fit along perfectly with new ones. Super serious about collecting everything in the game or creating your dream home? There is a whole community of players willing to trade items, currency and even villagers with you in order to get perfect islands (nookazon.com).
Now, for the actual game: I give it a 10/10. If I could ditch my real life and escape to a deserted island to hang out with friends and animals, I would. For starters, the graphics are outstanding. “New Horizons” is the first game in its franchise to be in HD, and it shows. Everything is incredibly detailed, from the hyper realistic creatures and fossils to small things like the player’s kneecaps. Going through the in-game museum is almost as satisfying as going through one in real life.

Another aspect of the game that I enjoy is the story. Although it only lasts for two weeks of gameplay, it makes you feel accomplished- like you’ve done something that matters — which is, getting a virtual dog to play a concert for you and your animal villagers. Yes, once the story is done you will feel a bit lost, but after a day of playing your own way, you will never stop finding new things to do.
That includes making your island just the way you want it. One of the new features is that you get all of the power in designing your island. You can choose where your shops go, where your villagers live and you can even create and destroy water and cliffs. Personally, I’m keeping the “deserted island” aesthetic and trying to make my island look neat but natural- but you can make your island look however you want.
Feel like putting a giant statue of a dinosaur in your backyard? That’s possible. Want to surround your least favorite neighbor’s house in fences, trapping them forever? You can do that. This game is all about what you want.

And there is a way to see how objectively good your island is- you can get your island ratings from resident services if you want to know how you can improve or make your island better than your friends.
Other new features include the mystery island tour, which allows you to visit tiny deserted islands, where you can meet potential new neighbors or collect resources, replace broken tools, use the new crafting system, and so much more.
And the returning features feel just as fresh as the new. As in every game, the raccoon capitalist Tom Nook is here, along with his employees Tommy and Timmy running the store, Nook’s Cranny. While the former bug and fish enthusiasts, Nat and Chip, are gone, they are replaced with Flick and CJ, their younger representatives. And nearly all of the villagers you love are here, including some new residents that can join you on your island. Old AC players will feel right at home in “New Horizons.” The only thing that really threw me off was the new auto-save feature- it’s very convenient, but I will miss my angry visits from Resetti.
The only downsides to the game that I have found are the $60 price tag, and the fact that online play requires a subscription to Nintendo Switch Online, which is $5 a month. But aside from these two things, “Animal Crossing: New Horizons” is amazingly done and is the best possible way you could spend your quarantine.