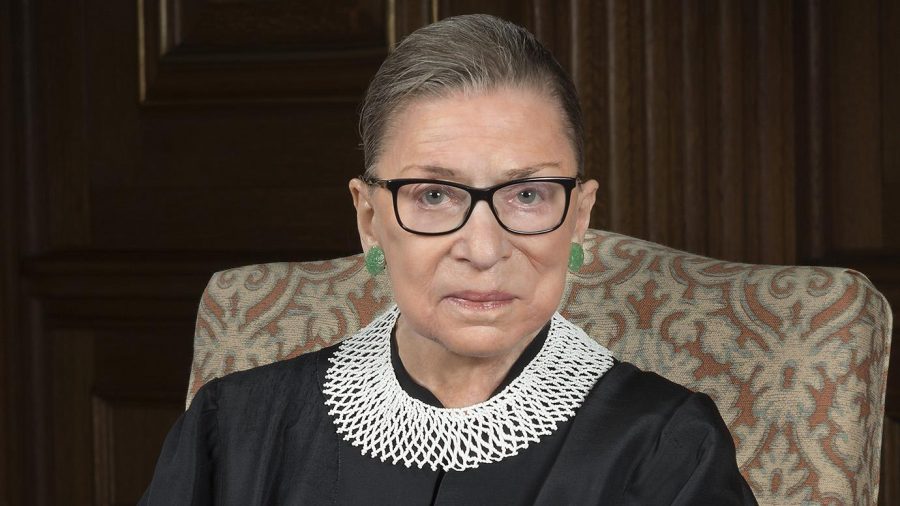 Ruth Bader Ginsburg, a pioneer in gender equality, died last Friday after a long battle with cancer. She served for 27 years as the nation’s first Jewish Supreme Court Justice, and the second woman to be appointed. One of only nine female students to graduate Columbia Law School, no legal firms were interested in hiring her after graduation despite being first in her class, until finally, with the help of her professor, she became a clerk for a New York judge, where she excelled before landing a position as a professor at Rutgers Law School.

Soon she became active in the fight for gender equality, taking on a case in which a man, Charles Mortiz, was refused a tax deduction for his dependent mother on the basis of sex. Winning in the lower courts, this decision was petitioned by the government, as it “cast a cloud of unconstitutionality” over hundreds of federal laws and statutes, many of which Ginsburg overturned. Her first Supreme Court case was Reed v. Reed, where she represented Sally Reed, a mother who wanted to be the executor of her son’s estate rather than her ex-husband. Presenting to an all-male Supreme Court, Ginsburg won, marking the first time in history in which a state law was struck down on the basis of gender discrimination.

Before her appointment to the Supreme Court, Ginsburg helped to found the Women’s Rights Project at the ACLU (American Civil Liberties Union), and argued a total of six cases before the Supreme Court, winning five of them. Eventually, she was made a Court of Appeals judge, and after serving for 13 years, would be nominated to the Supreme Court by President Bill Clinton and was approved overwhelmingly by the Senate in a 96-3 vote. Viewed as a centrist liberal, Ginsburg was fearless in her support of civil rights and the importance of both precedent and modern thinking, earning a reputation as a powerful dissenting voice.

Several historic Supreme Court votes passed during Ginsbugs term regarding LGBTQ+ rights, women’s rights, immigrant rights, and others. In Obergefell v. Hodges, the case that granted same-sex couples the right to marriage, she argued that the traditional marriage between a “dominant male and a subordinate female” had been struck down in previous decisions and that not only moral obligation but precedent was on her side, and played a key role in changing the public opinion on gay marriage, even officiating same sex weddings. In the end, the court ruled in a 5-4 decision, granting same-sex couples the right to marry across America. More recently, in 2016, the Supreme Court took on one of the many anti-abortion laws that have passed in recent years. Whole Woman’s Health v. Hellerstedt was a case regarding Texas’ law that placed strict restrictions and requirements on abortion providers, and in a 5-3 decision it was overturned, creating additional precent that demands Roe v. Wade be upheld. Other important cases that she was involved in include Bush v. Gore, US v. Virginia, Shelby County v. Holder, Burwell v. Hobby Lobby Stores, and Ledbetter v. Goodyear Tire & Rubber Company.

With the passing of Justice Ginsburg, the nation is left in a precarious position. What was once a 5-4 conservative Supreme Court could potentially become a 6-3 conservative court. This majority could mean legal precedent and court decisions are now firmly in favor of conservative policy. Potential issues that are at stake could include Roe v. Wade and abortion access, LGBT rights, same-sex marriage, the environment, prison/legal reform, gender equality, the role religion plays in the government, access to public healthcare, social security  and immigration reform. Essentially, every major issue is now on the table. Given the importance this position holds, it has stirred up a massive political argument over what should happen next. Donald Trump and the GOP have committed themselves to replacing Ginsburg within the current presidential term, hopefully before the election. Meanwhile, the left largely believes that the Senate should not confirm anyone before the election. This stems not only from political division, which indeed plays a role given that a majority of this size will fundamentally swing the court to one side, but also from precedent.

Back during the second term of President Obama, the majority Republican Senate refused to confirm anyone the president put forth. As Republican Senate Majority Leader Mitch McConnel said, “Given that we are in the midst of the presidential election process, we believe that the American people should seize the opportunity to weigh in on whom they trust to nominate the next person for a lifetime appointment to the Supreme Court.” He continued, “It is today the American people, rather than a lame-duck president whose priorities and policies they just rejected in the most-recent national election, who should be afforded the opportunity to replace Justice Scalia.” However, he has changed his opinion regarding Trump’s nomination, arguing that since the Senate majority is Republican, and was only strengthened with the 2018 midterms, it is perfectly acceptable to put a Supreme Court nomination up to vote with six weeks left until the presidential election.

The head of the Judiciary Committee, Republican Senator Lindsey Graham, also contradicted his earlier statement during the Obama presidency, where he said, “I want you to use my words against me. If there’s a Republican president in 2016 and a vacancy occurs in the last year of the first term, you can say Lindsey Graham said, ‘Let’s let the next president, whoever it might be, make that nomination.” Now, he cites the Democrats decision in 2013 to lower the threshold from 60 votes to only 51 required to pass a nominee, as well as “Chuck Schumer and his friends in the liberal media conspiring to destroy the life of Brett Kavanaugh and hold that Supreme Court seat open” as the reason to his change.

Critics of the president are now saying that the same policy that Obama faced should hold true now, and that because President Trump could be voted out within the next few months, he shouldn’t make a decision that affects the country for decades before the American people have had a chance to vote.

Given that the upcoming presidential election is less than two months away, many are wondering if the Senate should, or even could confirm a new Justice before the election. Typically, the time between the nomination and confirmation of a Supreme Court Justice takes between 70 and 90 days. In order to appoint a new justice before the election, Trump would have to do it in 44. What’s more likely is the confirmation of a new justice after the election. Regardless of who wins the presidency, as well as the fate of the senate, the GOP and the current administration would have a few months after to nominate and approve the justice. As of now, the Senate, which would need to confirm the nomination with a majority vote of 51, leans in favor of the Republicans. Currently there are 53 Republican Senators, 45 Democrats and 2 left leaning Independents, with Vice President Mike Pence serving as a tie breaking vote. In order to block the nomination, the Democrats would need their whole side to vote against, as well as both independents, both of whom lean to the left, and four Republicans. It is expected that the Democrats will vote unilaterally against the nomination, as will the Independants. The real challenge is in getting Republicans to vote against confirmation. However, some Republicans, such as Susan Collins of Maine, Mitt Romney of Utah and Lisa Murkowski of Alaska, seem to be considering the possibility of blocking the vote. Collins faces a tough re-election campaign in Maine, Romney is an open critic of President Trump and Murkowski had said before that she would not support a nomination of a justice this close to the election.

According to President Trump, “I will be putting forth a nominee next week – it will be a woman.” Who his nominee will be remains up in the air, though the popular pick is Amy Coney Barret, Seventh Circuit Judge for the U.S. Court of Appeals.