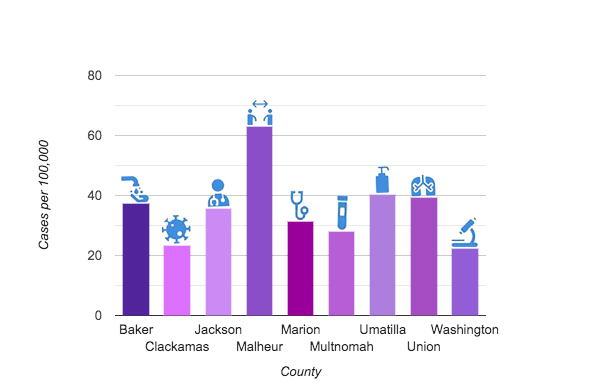 Governor Kate Brown initiated a two week freeze in Oregon from Nov. 18 until Dec. 2 in response to a spike in COVID-19 cases.

The freeze limits the number of people at social gatherings to a maximum of six people from two households. People who are found violating this rule can be subject to fines or arrest. Fines can be up to $1,250 while arrest consists of up to 30 days in jail. Violators may face one or both of these consequences. Local and state police will work to enforce this similarly to how they would respond to a disturbance.

Other limitations include restaurants being restricted to delivery or take out, decreasing the number of people in grocery stores and malls to 75 percent capacity, closing gyms and other fitness organizations and cancelling many recreational activities both indoor and outdoors such as zoos and pools. With these restrictions potentially limiting revenue due to decreased patronage, some businesses fear closure and workers are worried about being laid off.

Beginning immediately, anyone entering Oregon from another state or country must self quarantine for two weeks. It is also advised to avoid travel outside of Oregon as much as possible.

The number of COVID cases has increased by seven percent since this summer from social gatherings. With the fall season gatherings and activities have been moved indoors where it is harder to physically distance from one another. Large gatherings lacking social distancing and mask wearing have led the state to about 1000 cases daily in the past week, tripling the rate of increase from three weeks ago. Over 50 percent of the new cases have come from the Portland area, specifically the Multnomah, Washington and Clackamas counties. Once over 1000 cases, Brown deemed it necessary to put a pause on activities in Oregon.

While the majority of Oregon counties are closed for two weeks, some counties such as Multnomah County will be on pause for four weeks, possibly longer.