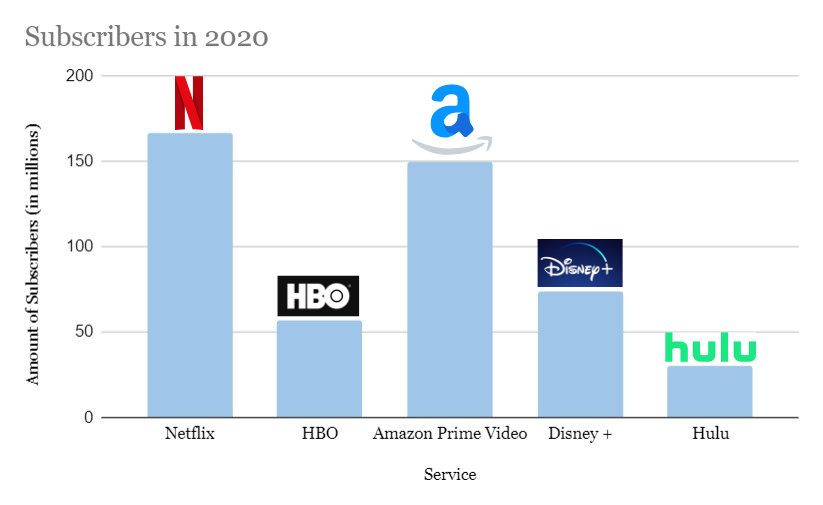 “Should we switch out our CBS subscription for Hulu? What about Disney+?” Video streaming services allow for the account holder and other members of the account to seamlessly access their favorite shows, movies and music. Whether it be On-Demand or Live TV, these entertainment outlets can be accessed through your phone, computer, tablet or television, the list goes on. Statista reported that 74 percent of American consumers used subscription On-Demand services in 2019. Forbes reported that over 55 percent of America’s population, around 182 million people, had been using streaming services.

Streaming services have always been competing, just like any other company in the business world. But monthly payments to the provider add up quickly and some streaming services are more valuable than others. Many customers are drawn to a certain streaming service because of the shows or movies they offer. For example, Disney+’s audience is one of the most loyal out there, customers feel compelled to subscribe to Disney+ so they could view the new Star Wars series only available on Disney+: “The Mandalorian.” Disney+ holds a right to the series, so they are able to selectively offer it on their platform for a fee. Customers are led to the necessity to pick and choose which services they want, sacrificing some shows for others.

Currently, no other streaming service can top the king of them all, Netflix. Netflix currently holds the title of the number one streaming-based service in the United States. But why exactly does Netflix hold its spot? Reelgood created a graph that pictures the “20 Most Watched TV Shows in the US,” 11 of the 20 shows listed were available to stream on Netflix and 8 of the 11 Netlfix shows were Netflix Originals. As the first of its kind, Netflix proved how successful the video streaming industry could be and soon many other companies followed in their footsteps. Now, Netflix is often forced to compete with services like Hulu, Disney+, Amazon Prime Video and HBO Max..

It seems streaming services have to give a big “thank you” to the Covid-19 pandemic because with the increase of staying at home came the increase of free time. Netflix was able to gain 26 million subscribers.

In my personal life, my family adopted more streaming services as well. We wanted to have more choices available to us that Netflix was failing to provide. So we added our Amazon Prime Video and Disney+ subscription, obviously being drawn in by the shows and movies they displayed on their roster. In response to the pandemic I’m sure other families have had similar experiences. I believe that Netflix is the most vital streaming service in our family, further proving its success.

Recently the Warner Bros announced that they will now be releasing their newest movies on HBO Max corresponding with their release in theaters. They claim that this is only for the pandemic but it’s hard to predict how this will play out. This move made by Warner Bros might completely pave a new way for the movie and streaming business. Competition leads to further advancement so consumers can expect more to come in the industry. As the entertainment industry continues to grow, more streaming possibilities, movies, shows and other sorts of content are on their way to consumers’ screens.