The appropriate time to buy a Christmas tree 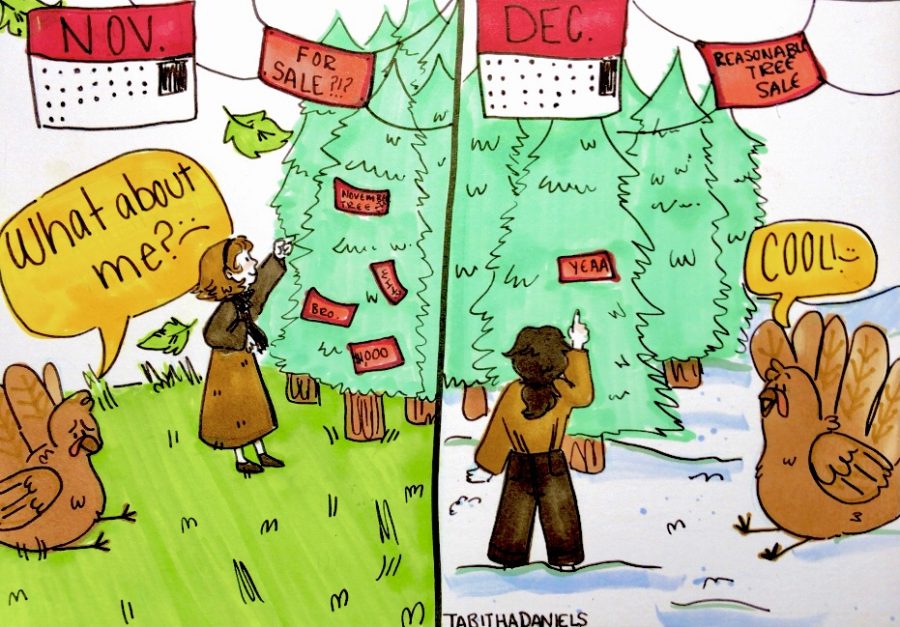 The Christmas tree is a major part of the holiday season for those who celebrate Christmas. A lot of people like to get their Christmas trees in advance, and there is nothing wrong with that, but something that irks me is that often people end up getting them way too early.

It is understandable to get it somewhat early, like a couple of weeks in advance. Then there’s time to decorate it and see it everyday before Christmas. It makes the house more festive and the way the lights glow gives the house a warm, fuzzy feeling. But there’s a certain point where early becomes too early. That point is Thanksgiving (and before Thanksgiving).

Basically right after Halloween, everyone is all about Christamas, even though there is an entire holiday in between. (Not to mention one that we get a week off for). Since Thanksgiving doesn’t have its own season like the Christmas season, a lot of people tend to skip over it and go right to Christmas until Thanksgiving rolls around. That doesn’t bug me, but the part that does is that some people decide to get their tree on Thanksgiving day. Or maybe even before.

Part of this is that businesses are selling trees that early. They definitely shouldn’t sell or start selling trees on or before Thanksgiving. Thanksgiving is its own separate holiday, and like any other holiday we should spend the time we have for it celebrating it, or at least not getting ready for another holiday. People should separate their holidays better and not spend one holiday prepping for another. So, to me buying a Christmas tree on Thanksgiving seems wrong, and maybe a little disrespectful to Thanksgiving. Thanksgiving is about being thankful for the things in your life and by doing that I feel like it kind of defeats the point.

I don’t understand why anyone would want to get a tree that early anyways. It would probably be dead by the time it’s actually Christmas. That isn’t to say that taking care of Christmas trees is all that much work, but it still has to be taken care of that much longer. Sometimes it’s hard to keep them alive that long anyway; why make it harder. They don’t go bad after being dead for a couple of days so it’s not that big of a deal, but knowing that your Christmas tree is dead on Christmas seems a little sad. Besides, there’s an easy way to prevent that: don’t get your tree until it’s actually December.

Now that it’s been discussed on when not to buy a tree, let’s talk about the appropriate time. Dec. 1 is the earliest acceptable time and the tree will last for four or more weeks if it’s taken care of. Anytime after that is also acceptable until it gets too close to Christmas and you should definitely have a tree by then. Technically anytime after Thanksgiving works too because that holiday is already over, but I don’t see the need to rush into it, seeing as it’s not even December if you get it at the end of the week.

There is such a thing as getting it too late also. I think the latest you should get it is the week of Christmas, like the 20th. There’s nothing really wrong with getting it super late either, it just won’t be up for as long which is kind of sad. Especially if you get it on Christmas Eve or something. It’s kind of like, why get one at all? But of course you have to, otherwise Christmas isn’t the same. The workers probably judge you when you’re there on Christmas Eve and think “why haven’t you gotten a tree yet?” but sometimes that’s just how it works out. And it’s not like they can stop selling them before Christmas unless they run out. Sometimes circumstances call for a last minute Christmas tree shopping, but that’s hopefully rarely the case.

Ideally, a Christmas tree should be bought the second or third week of December. That way there’s time to decorate it and enjoy its presence for the holiday season, and it can survive a little longer after Christmas to keep the holiday spirit through New Years.