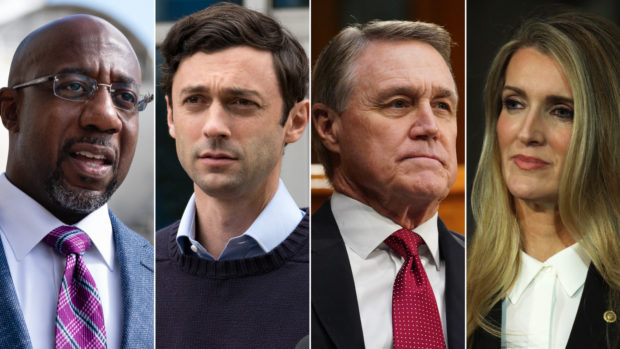 Georgia’s two Senate seats are both in run-off elections that will be decided in early January. In the initial election, two Republicans were running for the Senate seat of the special election, dividing the vote and making it impossible for any of the three candidates to obtain over 50 percent of the vote. Kelly Loeffler won the Republican nomination and is facing off against Democratic nominee, Reverend Raphael Warnock, while in the other race, Republican incumbent Senator David Perdue faces off against Democrat Jon Ossoff.

Two debates were scheduled on December 6 for the candidates to discuss their policies and defend their records. Perdue did not attend the debate, citing his desire to personally connect with votes. Ossoff responded to the decision, calling Perdue an “arrogant coward” for assuming he already has the peoples’ vote. Alone at the debate, Ossoff discussed his plans to strengthen the Affordable Care Act, reform criminal justice, and tackle corruption on Capitol Hill. He attacked Perdue’s stock trades in which he sold close to $1 million in a company he used to serve, weeks before it plummeted following the news of an executive officer stepping down. The Department of Justice investigated this claim and cleared Perdue of any wrongdoing, but Ossoff points to this as a pattern of disrespecting the public and misusing the office he holds.

The debate between Loeffler and Warnock followed a more traditional pattern of opposing policies and attempts to define their opponent. Loeffler has been staunchly pro-Trump, and continued to support his right to a recount in the election, while trying to portray Warnock as a radical liberal that will raise taxes and defund the police. On the other hand, Warnock talked about his childhood that depended on public education and federal welfare policies, and pointed out that Loeffler is currently the wealthiest member of Congress with a combined worth (with her husband) of $800 million. If elected, Warnock would be the first person of color to represent Georgia in the Senate.

After a tight presidential election ending in Georgia flipping blue for the first time in 30 years, Democrats remain hopeful that they will be able to flip the remaining Senate seats. If they succeed, the Senate would no longer be a Republican majority, but rather it would be evenly split with the vice president deciding potential ties. Stacey Abrams and her organization, Fair Fight,  have registered thousands of eligible Georgia voters, which has contributed to increased voter turnout in these extremely tight races. The entire United States is watching these final intense races as the deciding factor in a Senate majority and an indication of what the next four years will entail.