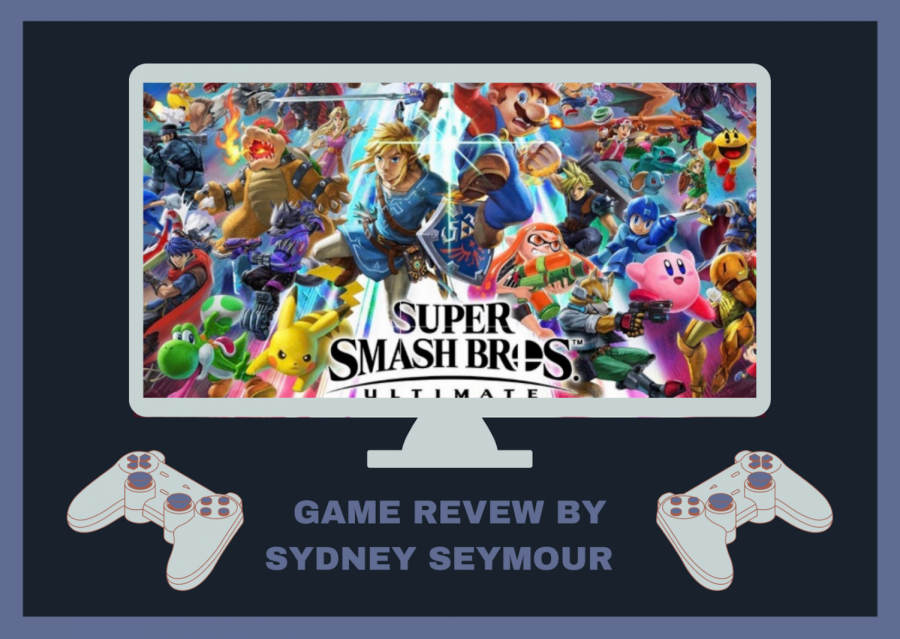 Super Mario. The Legend of Zelda. Donkey Kong. Minecraft. Kirby. Pokémon. Sonic The Hedgehog. Pikmin. Animal Crossing. WiiFit. Mii. Pac-Man. Splatoon. 74 playable characters from across video game history all in one game. There are more than 100 battle stages designed based off of the video game locations. Those stages even change shape, inflict battle and have guest characters that suddenly appear during game play. Bored? There are over 10 game modes: classic, squad strike, tourney, special smash, training, mob smash and even virtual reality. Tired of smashing all day? Spirits is a whole different part of the game as you battle spirits through an adventure/campaign mode.

Super Smash Bros. Ultimate is a fighting game in which up to eight players attempt to knock each other out of the battle stage. As a new player to the game, I wholeheartedly enjoy picking and choosing new characters because each of them have different abilities and weaponry. No battle is ever the same because you can adjust the rules, battle arena, game mode, characters, number of players and so much more to your liking. It’s a pretty addictive game because it doesn’t get repetitive, and I often find myself playing for hours on end. Additionally, every couple of matches you randomly fight a new “foe” to get them on your team, which is a smart incentive to get people to keep playing. Another incentive is the music during gameplay. It’s  upbeat and fast and they have some great tunes which always get stuck in my head.

On the other hand, I’m not very good at the game. There are advanced techniques and button pressing that you need to know in order to actually have a shot at beating higher level players. While frantically pressing buttons, sometimes your character doesn’t obey the move and you just fall off the map and die. It can get very hectic and chaotic in the battle arena, which makes it harder to know which player is who. Similar to any game, if you keep losing and losing, you often don’t want to play anymore; however, if you are playing with computer players you can always adjust their levels. Furthermore, if you have abnormally large hands, I would advise you to buy a Nintendo Pro Controller rather than trying to press the tiny buttons and maneuver the joystick on the Nintendo Joy-Cons. Even with all the game modes and setting adjustments, the game can still feel similar. In the future I would like to see some sort of capture the flag or a race to the finish.

Overall, I rate Super Smash Bros. Ultimate a solid 8.2/10. It’s easy to pick up, but it’s difficult to master. I would recommend this game to anyone who’s looking for a family friendly or even just a competitive game to play.