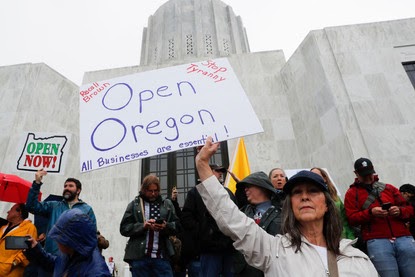 Before the violent protest in the nation’s capital on Jan. 6, there was a similar protest in Salem, Oregon where angry Trump supporters fought with police. Many of the protestors managed to enter the building through a side door that Representative Mike Nearman held open so that they could enter. The mob was also protesting the coronavirus precautions set in place by Governor Kate Brown. There was set to be a session discussing these precautions inside the building, but it was cancelled due to the breach.

The video of Nearman shows him leaving through a side glass door, where a protester races to keep the door open and let people in. Shortly after, police are seen trying to prevent them from entering for roughly eight minutes. Two protesters were taken into custody initially and four were eventually arrested.

In addition to the riot in Salem, Americans also breached the U.S. capitol building in a violent riot in support of Donald Trump’s claims that this year’s presidential election was rigged. Three of the men involved in this riot were from Oregon: David Anthony Medina, Tim Davis, and a third man whose name has not been discovered yet. Another Oregonian was also arrested named Kristina Malimon, who is the Vice Chairwoman of the Oregon Young Republicans of Oregon. The US Attorney for Oregon Billy Williams has vowed that “any Oregonians who traveled to participate in this violence […] will be prosecuted in the district of Oregon to the fullest extent of the law.” The Portland FBI Field Office has not commented on if the three men from Oregon who participated in the violence will be part of their investigation.