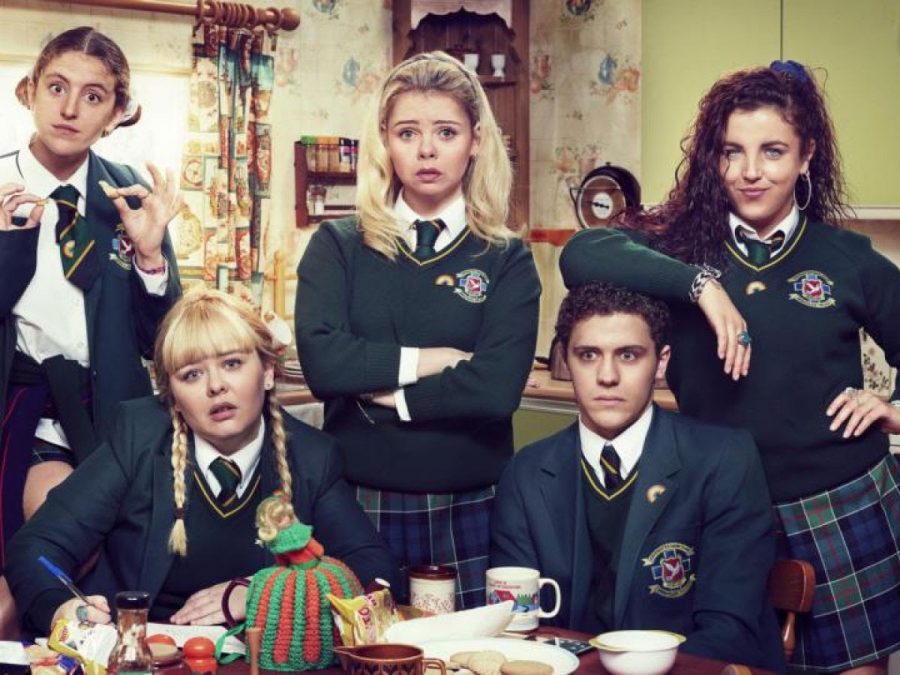 Like most people, I’ve watched a lot of TV over the past couple of months. I’m talking hours and hours of mindlessly staring at my computer screen with my eyes glazing over. My growing reliance on it is pretty sad. Still, after simmering in self-pity for long enough, I’ve realized that I can make myself feel at least semi-productive by watching shows in order to write reviews on them.

After deciding to watch Netflix with a purpose, I was disappointed by a lot of my recent finds. Unpopular opinion: “Criminal Minds” is a bust after the first four seasons. After stumbling my way through the various sections of Netflix, I found a show that finally worked for me. It was a match made in heaven for my short attention span, with brief episodes (under 30 minutes each) and a premise that genuinely piqued my interest. As you’ve already read the title of this article, I’m sure you’ve guessed that this mentioned show is “Derry Girls.” Well big surprise, you’re right. And if you’re looking for a new and lighthearted show, stick around and let me explain to you why I hold it so near and dear to my heart.

My favorite aspect of the show is the plot. It’s always simple from episode to episode, but I appreciate that it keeps things from getting messy and overcomplicated. There is also a historical aspect of the plot which pleases my nerdy brain. If you don’t know, “Derry Girls” follows the life of a tightly-knit teenage friend group growing up in Derry, Ireland in the 1990s. In this setting, things were pretty chaotic. Sectarian violence overwhelmed Northern Ireland, all stemming from conflict between the Catholics and the Protestants. I don’t want to overwhelm you with details, but just keep in mind that it had a great impact on the citizens of Ireland, including the main character, Erin, and her friends.

I appreciate the little glimpses we see of this conflict (“The Troubles”) mainly because it is often ignored by the entertainment industry despite its vast impact on the United Kingdom. This was actually the first show I’ve seen that has even mentioned “The Troubles,” so I applaud “Derry Girls” for taking a leap of faith and exposing viewers to less-talked-about history.  It was a sizable risk on the creators’ part due to the controversy surrounding this conflict and whether it has truly ended, but it paid off in the long run.

Even though I loved the show, I still can’t help but find fault in it (I love being a pessimist). The most noticeable and tiresome is how the stars of the show are much older than the characters that they play. I never realized this at first, but now that I know, I can’t stop thinking about it. For example, one of my favorite characters, Claire, is 16 years old. But, the actress who plays her, Nicola Mary Coughlan, is 33! This age gap seems ridiculous at first, however, Coughlan fits the role perfectly. Even in her 30’s, she passes for a teen easily and mimics a 16-year-old’s sheepish nature. But, she was most likely cast for this role because her experiences match those of her character. Just like Claire, Coughlan grew up in ‘90s Ireland. Because of this and her charming acting, I’ll let her get away with it.

As someone who appreciates fashion but can never quite understand it, I’ve noticed that the style in “Derry Girls” differs from what is typically worn today. After a quick bit of research, I soon learned that all of the outfits worn accurately portray how people dressed in the setting of the show. They look good as well but in a less sleek 2021 fashion and instead in a more “out there” way. Even though I wasn’t born in time to see the ‘90s, I still feel a sense of nostalgia when I look at Erin and her group’s outfits and listen to their soundtrack. It pains me that I’ll never experience life as the Derry Girls did, but what can I do? Well, there is something that can take my mind off things. I’ll just drown my sorrows in denim jackets (the ‘90s Irish wardrobe staple). Side note: my credit card needs to be taken away from me ASAP.

At this point, I hope that you’ve mustered up the courage to at least start the first episode. It’s only 23 minutes long and worth every second of your time. Even if you didn’t like it, you’ve only wasted 23 minutes. In “online learning time,” that’s like the blink of an eye. Not even half of a class period. I’m not suggesting anything, but do whatever you feel is right. If you want to spend your class time watching one of the most enjoyable shows out there, there is nobody stopping you. Life is too short for school, just watch Netflix instead.