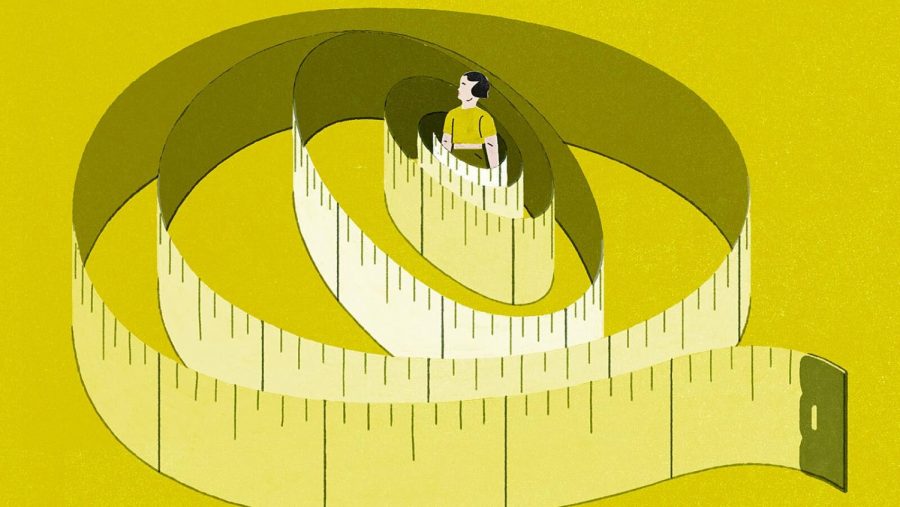 Calls to the National Eating Disorders Association hotline have increased by 40 percent since March of 2020. Researchers have mainly attributed this increase to the ever-present difficulty of life during the pandemic, but there have also been many nods toward the effects of social media, more specifically TikTok, on eating disorder (ED) rates. I know we’re all sick of hearing just how bad social media is for us—the stream of “clickbaity” articles from parents and grandparents feels never-ending. However, when it comes to such dangerous mental disorders, it’s important to be wary of their many, potential online causes.

The most prominent ED-provoking trend I’ve seen are the “What I eat in a day” videos. When they first appeared on my “for you” page, I actively enjoyed them and appreciated the skill that went into the dishes shown. I would “like” them and not think much else about it. They were pure (and may I add “very aesthetically-pleasing”) entertainment. But then things took a sinister turn. I quickly fell down a rabbit hole of videos that included highly detailed calorie counts of each meal and “body checks” throughout. I started feeling more and more uncomfortable with each food log and caught myself comparing my eating habits to those of the creators. My diet would’ve been considered a cheat day for the majority of “fitness influencers” on the app, and jokes aside, that realization stung. I imagined them seeing fault with my eating habits, which upped my guilt by about tenfold. My relationship with food was already becoming increasingly fragile, but my journey didn’t stop there.

The next trend I stumbled upon seemed fishy from the start. To some, it may have appeared innocent, but I’m grateful that the majority of users saw right through it. A few months ago, women shared their exact body measurements in hopes of being scouted by modeling agencies. As you would expect, these measurements were tiny. I won’t share any specifics, but they were far below the U.S.’s average and generally unrealistic. These videos made anyone who failed to match these almost Barbie-sized numbers feel inadequate and ugly, even though one size isn’t inherently better than another. The girls in these videos were praised for their thinness, and any outsiders were left to find a method to shrink themselves down. Unfortunately, the available methods (along with feeling the need to change themselves) are extremely unhealthy, both physically and psychologically.

When I think of normalizing unhealthy eating behaviors, a specific account comes to mind. It’s one I used to follow. The account goes by the name of “joeybdez.” Its owner, a man by the name of Joey Bermudez, makes content on his fasting journey. To support a healthy weight, Bermudez eats only once a day but consumes around the daily recommended 2000 calories in this single sitting. The issue with this one seemed fairly obvious, but the majority of Bermudez’s over 313,000 person fan base fails to see fault in the account. I’ll make things simple; eating one, massive meal every 24 hours is binge-eating. It’s just as unhealthy for your body as it is for your mind. People are supposed to eat around every four hours, and refraining from doing so is bound to negatively impact your body’s ability to function. Through his lifestyle and continuing to make and share these videos, Bermudez tells his audience that this behavior is healthy and sustainable. In the comments of multiple videos, he even encourages them to try it for themselves.

Thankfully, some people have become aware of the threats that certain trends and creators pose to the app’s mainly adolescent user base. They see the pain and guilt that they cause and seek to relieve it. Thus, they make videos and accounts surrounding the idea of loving yourself and fueling your body with food that will truly make you feel good. These body positivity accounts face a good amount of backlash, but they’re largely well-appreciated and have gained many fans over the past year.

As much as I appreciate the work of body positivity TikTokers, I strongly recommend staying off of the app instead of taking any chances. I know my plea is most likely made in vain, but apps like TikTok thrive off of self-hating users and toxic trends. Even if you decide not to take a break from the app (I understand, I won’t either), at least press “not interested” on videos that resemble what I have mentioned to avoid seeing similar (or worse) content. It may seem harmless at first, but if you’re caught off guard, videos like these can be extremely harmful to the psyche.

Know that you and your body deserve love even if social media makes you believe otherwise. Eat well and whatever you desire. As Donna and Tom from “Parks and Recreation” would say, “treat yo’self” and maybe even to a break from social media. I know it sounds terrible, but give it a shot. You won’t regret it.