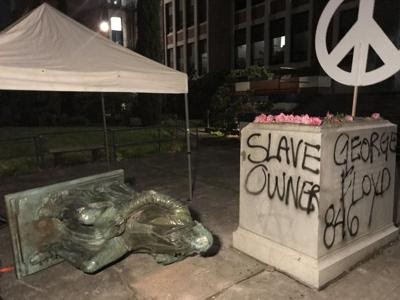 Over the summer, the Portland Public School Board came to the unanimous decision of renaming Southwest Portland’s Woodrow Wilson High School to Ida B. Wells High School. While many progressive members of the community have fought for the name change for years, pressure intensified after the murder of George Floyd and the protests that contributed in the fight for racial justice in the summer of 2020.

Woodrow Wilson, the 28th president of the United States, has been a controversial figure. Among a number of racist statements and policies, Wilson kept the White House extremely segregated, and kicked out a civil rights leader from the Oval Office in 1914 when he attempted to protest the segregation Wilson was implementing. He had ties to the KKK as well, which includes writing a history textbook praising the Confederacy, calling the KKK an empire created to protect the South, and agreeing to screen the film “The Birth of a Nation” where Confederate Klansmen were praised and the villains were whitemen wearing blackface. Wilson even stated in a private meeting once that segregation within federal agencies was beneficial to Black people.

By contrast, Ida B. Wells was a contributing and founding member of the National Association for the Advancement of Colored People (NAACP) and a journalist who was vital in the Civil Rights Movement. Wells’ investigative journalism documented lynchings and the dehumanizing treatment that Black people faced in the South. She was a pioneer within the Women’s Rights Movement and continued her activism despite facing numerous death threats and public scrutiny.

While Ida B. Wells High School is the first to have its name officially changed, the Portland Public School Board has stated that they are also planning on changing the names of many other public schools in the area including Thomas Jefferson High School, James Madison High School, Andrew Jackson Middle School, Jo Lane Middle School, Simon Benson Polytechnic High School, Alliance High School and Kellogg Middle School. None of these changes have been finalized except for Madison High, which will now be named after Leodis V. McDaniel, a Black American who served as the school’s principal during the 1980s.

Another school in the district, Thomas Jefferson High School (known as Jefferson High School), has not announced a new name change, but it is to be expected according to the School Board. Last June, protestors dismounted and damaged the statue of Thomas Jefferson in front of the main building. The podium where the statue once stood was graffitied with words like “slave owner,” “BLM” and “George Floyd.” Jefferson was the third president and had controversial, abusive sexual relations with Sally Hemings, one of the enslaved Black people on his plantation. Jefferson conceived over six children with Hemings and historians argue over the nature of their relationship and the freedoms that Hemings had due to her relations with Jefferson. It is also acknowledged that Jefferson had over 600 slaves during his lifetime and sexually assaulted and raped many other of his female slaves.

Many of the name changes are expected to be done by the beginning of the 2022 school year. While determining the name for Ida B Wells high school, there were many other considerations for who to rename it after, that are going to be considered as well for the other Portland schools.