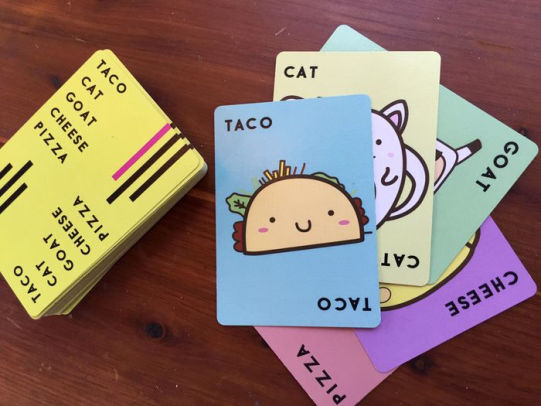 In April, the third annual American Tabletop Awards for 2021 were announced to a variety of board games and card games. There are four different categories and four different winners: “Abandon All Artichokes” won the Early Gamers; “The Crew: Quest for Planet Nine” won Casual Games; “Calico” won Strategy Games and Dominations; and, “Road to Civilization” won Complex Games. I’m only familiar with “Abandon All Artichokes” and, from first hand experience, I do believe it’s in its rightful spot, however, there are many other games that deserve recognition. If you’re looking for any board game or card game recommendations, here they are. You can buy most of them at Target or on Amazon. These are all appropriate for family and friends and are absolute crowd pleasers. In case of emergency (or boredom), I keep them all in a bag in my car.

Suggested Age: 8 years and up

This hand-slapping card game is addictive, social, action packed and quick to learn. The aim of the game is to get rid of all of your cards by racing against each other to slap when there is a match between a card and a spoken word. Each player places a card from their hand face up in the middle community pile and says either “taco,” “cat,” “goat,” “cheese” or “pizza” depending on the sequence. When the card matches the spoken word, everyone slaps their hand on the deck and the last one to slap picks up the cards. There are even special cards (like the gorilla, narwhal and groundhog) where players must make matching gestures before slapping the deck.

Suggested Age: 9 years and up

Winks, signals, missions, stealth and interceptions are jam-packed inside Shifty Eyed Spies. To set up the game, each player receives a spy character as well as three interception tokens. There are four different locations in the four different corners on the table. To start the game, you receive a location and another spy character. You wink at the spy you have, and then they will look at the location in their hand.Whenever someone winks at you, you shift your eyes to the location on the table. Once you declare your mission accurately, you and the other spy both get a point. Two spies win the game once they both have five points and then complete a mission together. But, if you are ever caught winking or signaling at a location, you may get intercepted and your mission is blown.

Suggested Age: 10 years and up

As each player attempts to deliver their love letter into the Princess’s hands, they also must keep other players’ letters away. This is a quick game of risk, deduction and luck that contains a series of characters with different abilities. The characters range from The Princess with eight points and The Guard with one point. Each player picks up and discards a card each turn and attempts to knock people out of the round by guessing which character is in their hand, by comparing values of character cards or by forcing a player to discard The Princess card. To win a round, you must either have the highest-value card at the end or be the only player left standing.

Suggested Age: 14 years and up

Suggested Age: 14 years and up

Ever wanted to solve a murder? Well, in Unsolved Case Files each player becomes a cold case detective tasked with solving a murder that happened decades ago. In each case file, there are over 50 evidence photos and documents for you to investigate, including newspaper articles, crime scene photographs, an evidence report, phone records, the coroner’s report, fingerprint cards, a map of the crime scene, legal documents, suspect interrogations, witness statements, character photographs and much more. There are multiple different versions of the “Unsolved Case Files,” and I highly recommend “Max Cahill’s Unsolved Case File” if you’re seeking a challenging game of mystery and murder that’s is perfect for individuals or groups.