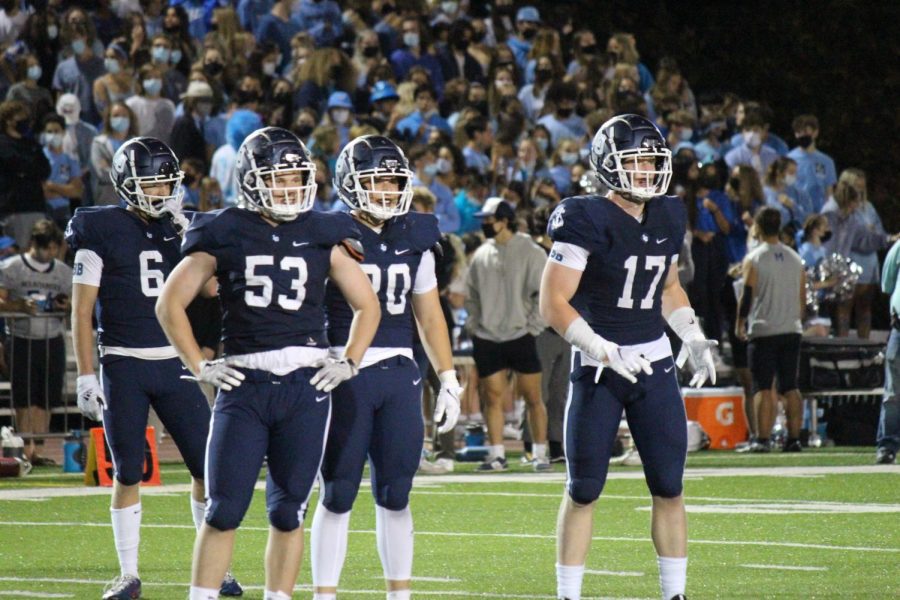 Under the lights of Cobb Field the Lakers returned to another season of football, playing the highly anticipated first football game was against Mountainside. The Lakers started off the first quarter by accumulating 13 points, while Mountainside scored seven. During the second quarter, Lake Oswego scored an additional 20 points while Mountainside scored none. The third quarter and fourth quarters were both additional shutouts, with Lake Oswego scoring seven points in the third quarter.

The game began with a ceremony to honor Brian Bartsch, a lost teacher and beloved coach. “It was really emotional to begin the game. We presented his parents the game balls and to me personally it was great to start my season off,” said junior Calvin Macy. “No one cared more than him and he also made everyone feel loved and cared about… We have BB on the back of our helmets for Brian Bartsch and we wear these t-shirts that have his name. We honor him everyday.”

As they continue to play, the team feels the impact of the loss of Bartsch everyday, “He meant so much to this program and so much to us. That I think that playing for him and going as far as we possibly can is… what means the most to me, what I’m excited for.” said senior Austin Leykam. Many players expressed their motivation to get to the playoffs as a way to honor Bartsch.

“I think playing without him was like a big push for us. So it helped us even more to like to do it for him and this game is for him. Basically this whole season is for him and just trying to win it for him.” said senior Gabe Olvera.

Lake Oswego High’s Student Section was filled to the brim with cheering, enthusiastic students. As the pep band assisted in cheers, students chanted star players’ names and continued the tradition of leading different cheers to hype up the audience. “We love the fan support. You guys came out in bunches and it meant a lot to us so if you guys could keep that up the whole seasons; we only have four home games.” said Laykem. At half time the dance team put on a wonderful performance, greatly appreciated by the crowd as they cheered all the way through.

As the season continues, the team, students, parents, commentators and fans push forward with anticipation for the season, wins and, hopefully not, losses to come. With such a breakout first game, the Lake Oswego Football team has high hopes for the rest of the football season. “I would hope every game is like that for me, not just for me but like we win every game as a team. So we can do well in the playoffs and hopefully compete for a championship.” said senior Justius Lowe. “Come out and enjoy the football.”