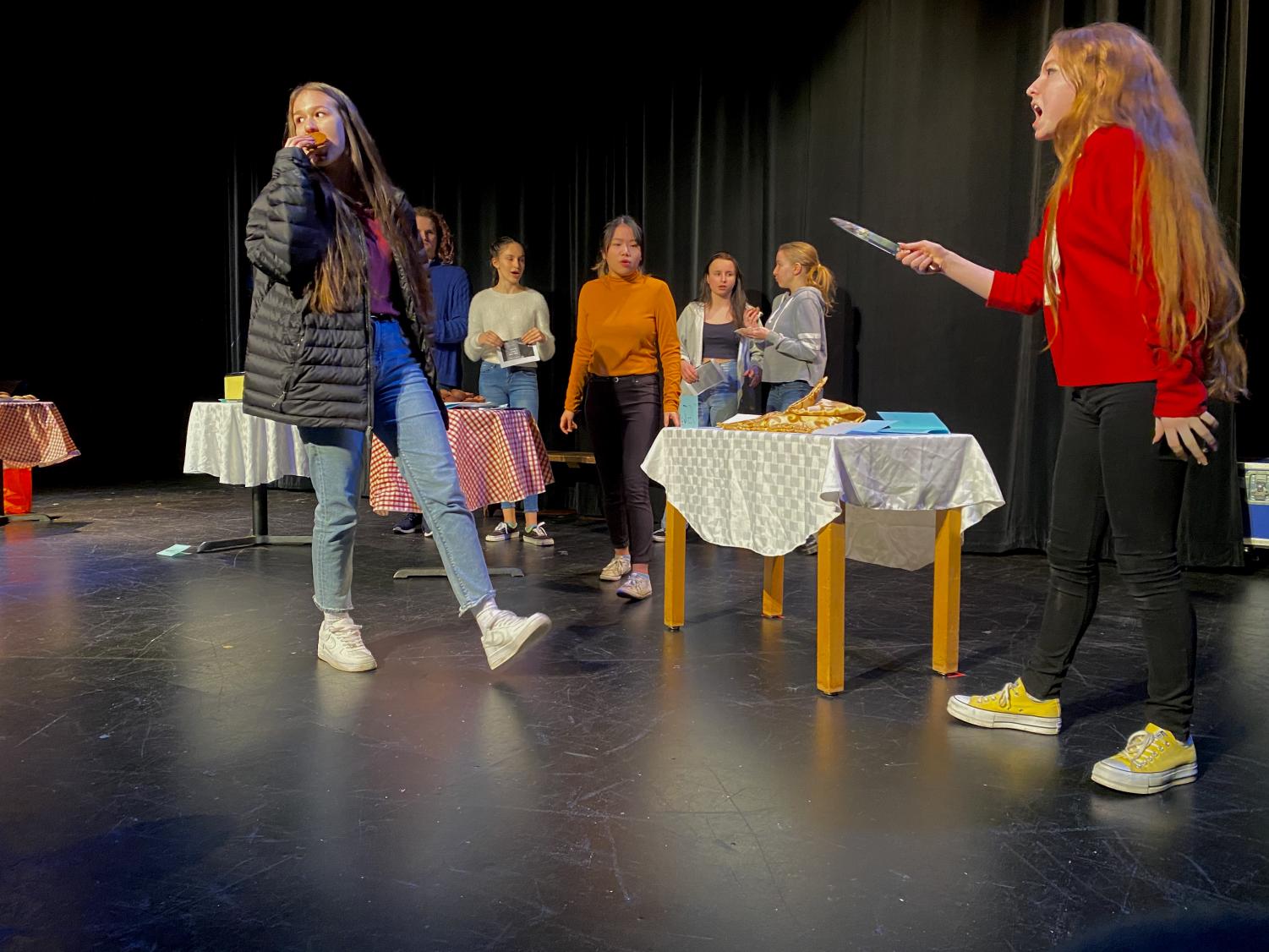 In the final scene, actors engage in a knife fight over some specialty pie. (Cameron Iizuka)

In the final scene, actors engage in a knife fight over some specialty pie.

On Friday, Jan. 17, students from Performance Seminar, the most advanced drama class offered at LOHS, performed songs and scenes they’ll be performing at the upcoming regionals.

Dubbed Fine Arts Night, the hour and a half long performance featured students from the drama class Performance Seminar and was the first time their work has been exclusively showcased at the high school.

“All the work that we performed [at Fine Arts Night] is for regionals, which is Feb. 1, and is a fun competition where you can move on to state or win fun medals and meet a lot of other kids from other schools that do theater,” said senior performer  Kelly Simmons. “For me, it was really exciting, getting to perform all this work we’ve been doing in class to parents and friends that normally don’t get to see that kind of intimate classwork that we do in acting.”

With Performance Seminar now offered as a year-long course, instead of a semester-long one as it has been in previous years, it allows for more student showcase opportunities like that of Fine Arts Night.

In the audience, junior Caitlin Sirrine especially loved the show for some of the creative liberties it took. For example, the longer one act that was the final performance of the evening was set at a bake sale and used real dessert as props.

Sirrine said, “I really enjoyed seeing each performer bring their own talents to the tale for their individual portions however my favorite part of the entire show was the use of actual food as props for their group scene, just because it was something I’d never seen before and really made it something special!”

Another audience member, freshman Kate Johnson added, “I’d have to say that my favorite aspect of the performances, as always, was the acting of the characters. As an actress with some theatrical experience, the portrayal of the characters can really make or break the show- and in this case, I think that the actors pulled it off to create a spectacular performance!”

The personal, poignant performances, as well as the humorous moments in the doubles skits and the finale One Act made the show come together for Johnson.

Johnson added, “The acting was very fun to watch, and kept everyone entertained and on their toes!”

This top-notch acting can be attributed to no one but the actors and actresses chemistry and natural talent, as well as their director, Bob McGranahan.

Simmons added, “Honestly, in class, getting to perform each other’s pieces and giving notes and being a really intimate, hardworking environment, versus [something] like Acting 1 or Acting 2, where we talk about who these characters are and what they really want and how you can achieve a really intimate setting… Everyone is so dedicated, so kind. I’ve never been with a cast that works so well together.”

Lastly, from Lake Views to everyone going to regionals on Feb. 1, good luck!